The last few months have been pretty exhausting for me, but we got a lot done. In addition to our other paid work, we shipped two games: Sense of Harmony for the 2020 Interactive Fiction Competition and OverTaxed for the 2020 WordPlay Festival.

I wanted to take some time to reflect on what's happened. I'm not that experienced with writing post mortems but I am going to give it a shot. 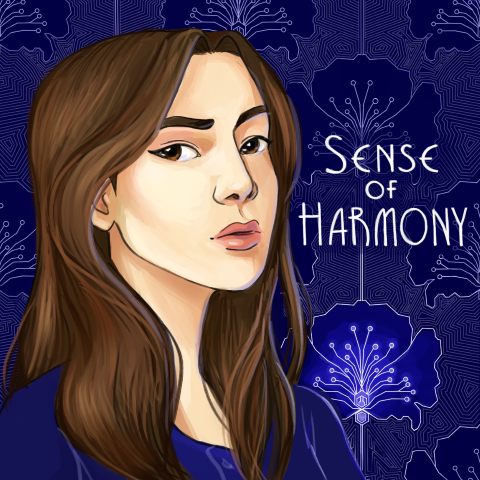 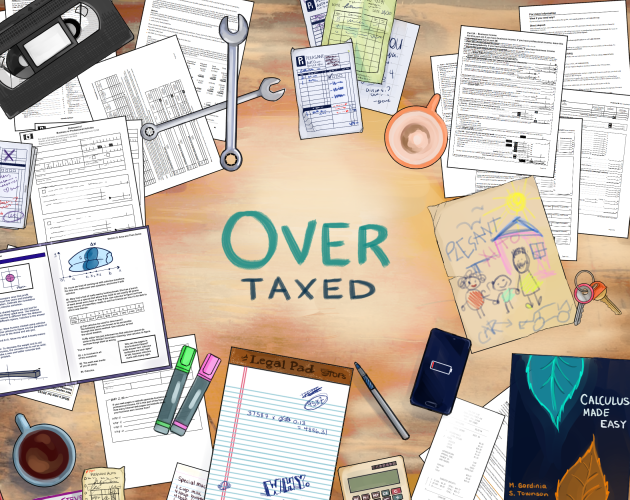 Sense of Harmony has gotten a modest but significant amount of attention at the Interactive Fiction contest this year. Basically every review reads the same: the mechanics are unique, the character is interesting, but it felt like a demo. 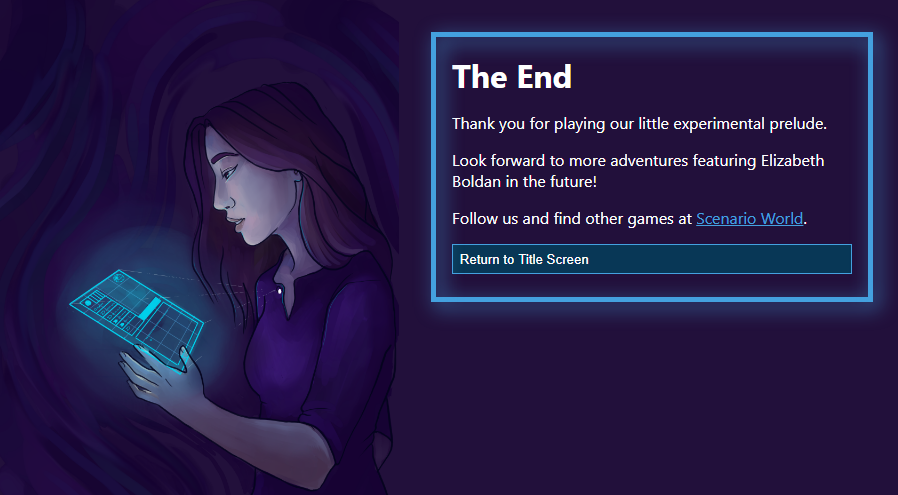 And it basically... is a demo. It's not really what I intended, but it's hard to deny given the final product. Much is made of the world and the character, and in playing as Elizabeth Boldan you're forced to make a few difficult choices, but whatever their consequences are, you don't really get to see them. The game ends just as the seeds of its own conflicts begin to sprout. It hints at much, but resolves little.

This is her super power, but it comes at a cost: she can't turn them off. Their very presence in her was a part of a freak accident at birth. They come with no manual, and to her knowledge, not a single other person is like her. She is awash in the feelings around in, and in the stalled out future of the year 2029, there is more than enough sadness to to absorb into herself.

What I wanted to accomplish with Sense of Harmony was an eve in the life character introduction. What is an average day like in the life of Elizabeth Boldan? How does she live with these powers? How do they affect her relationships? Her job? All that interesting stuff that really motivated to start this series.

And that's the stuff that really hit players. The opening scene involves Elizabeth with a client who is pressing against her boundaries with his emotional needs. She can always say no, but his desperation for attention from her to fill the void in his life is just as much in her head as it is in his. How can she tend to her own feelings when she can't put others aside?

While this scene works great, there's never any resolution in the game itself. Liz reflects on her decision throughout the rest of the evening as we're introduced to the cast of her friends and coworkers. Then, a mysterious client arrives, but disappears almost as quickly as they come. Then the game ends, hinting at what this may all mean.

This left the whole thing feeling unresolved. As I said, I wanted to make more of an eve in the life. It's supposed to be a buildup to longer games to come, but it wasn't supposed to be a demo. If I had to do this all again, I'd probably have cut out the mysterious client and instead focused on resolving the difficulties with her client in the small scenario. This way the game would still be a teaser, but wouldn't feel like it'd been cut off before it began. As it stands, it feels more like "Chapter 1", which is exactly what a lot of people said.

What I'm happy about is how a game about a sex worker that wasn't parody, erotica, or an exploitative piece of tragedy porn was recieved. I was really happy to work with a sensitivity reader with experience in sex work as well. This is not something I've done before, shamefully, and it was really helpful in improving the final product. I was definitely nervous going through the process at first, especially since I didn't know the editor personally, but quickly realized people really just want to help you make the best product possible and people aren't going to shame you for mistakes as long as it's clear you're putting in the effort to do things right.

And now that I know how to write the game, all that remains is to write more.

OverTaxed was produced as part of a commission for the 2020 WordPlay Festival in Toronto (though this year it was hosted online). Earlier this year WordPlay opened submissions for game pitches and we submitted. At the end of September, we got the email: our game about helping your Uncle do his taxes had been accepted and the festival was in two months.

Two months is not a lot of time to make a game, especially when you only have three people to make it and not all of them can do it full time. Story-wise, Liam outlined the game and came up with the characters, while I did all the actual writing and designed the gameplay. After that we worked together on the programming and he took care of the photography and audio in the game, while Sarah took care of the art.

At the half-way point, I felt pretty certain we had over-scoped the project. Now that I'm on the other side though, process I think was the biggest problem. I should mention first that the entire game got done and is fully playable, but it was a rough ride getting there. I started writing far too late, partially because of issues locking down good consultants for the games content. I spoke to a number of friends who had very intimate stories to tell about helping their extended family with paperwork, including times when those extended family members could barely speak English. There was a lot of special moments there. I tried to carry some of that into the work, despite the fact that Dina and Elias are more estranged than the relationships I heard about in interviews. Still, these conversations were really interesting for all involved. The biggest failing, however, was not actually speaking to someone with a Lebonese background, which is what the two characters in the game actually have. The contacts we thought we had in our own networks fell through. I could have reached out to the public to find someone, but my own social anxieties around strangers prevented me from doing so. This is my biggest regret about the project, but it's an internal obstacle I want to work on going forward. As a result, you'll see that the specific cultural context of the characters in the game is really played down, which is a shame.

That being said, I think the story works really well overall from the people who reviewed it, including those with immigrant backgrounds. That being said, there's probably a lot to improved, and I'd be really interesting in hearing feedback from anyone who has any.

The other thing I'm not too sure about is using actual tax forms as part of our gameplay. The situation is, in-universe, meant to feel hopeless. A 20-something whose never done her own taxes trying to help her Uncle who owns his own business and barely keeps proper records? And the taxes are due in days, not weeks? This was never going to be a story of success for our two heroes. So, on the one hand, making the player fill out actual tax forms that are very tricky to actually do properly puts you right in the headspace of the characters. You keep screwing up and you don't know why. That fits the arc. 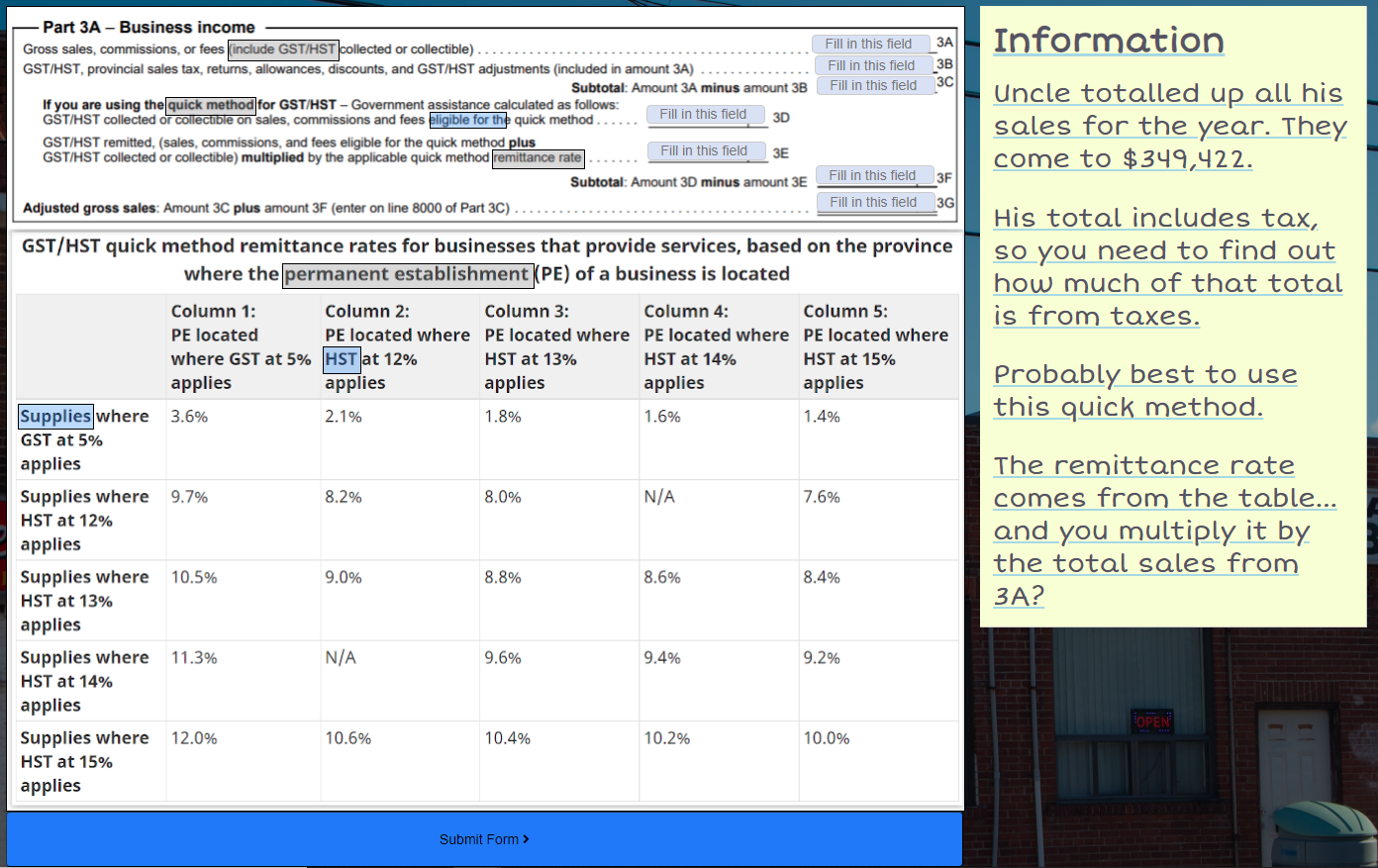 On the other hand, this is a game. Game's are supposed to be fun? I know much has been made about non-fun games being also good, but that's a tricky thing to design. In my case, I need to somehow tell the player: its okay to fail, just try your best. But how to do that without just breaking the fourth wall? Some playtesters found parts of the game incredibly frustrating, which is always a shame to hear. With the tight deadline, I did what I could. I added more hints, I removed certain difficulty features (it used to be you could only ask so many questions on a form before getting locked out), and even added "Don't worry about getting it wrong" to the hardest form's description.

Did any of that help? It's hard to say, because I made those changes a day before the festival (lol).

Regardless, making this game taught me a lot about project management, scheduling, and scope, all of which I'll be taking with me going forward. It also gave us a chance to iterate on our engine and tools which we will continue to use going forward. I have no regrets. Except all the ones listed above, of course.

Our next big goal is to produce a full blown mobile game featuring the mechanics and characters from Sense of Harmony. First though, a break. I am at the very least pretty tired and both Liam and I have a few "other parts of our lives" things to figure out. Currently I'm chipping away at getting a full game outline ready so we'll know exactly what we're building, and with any luck I'll be soliciting some early feedback on it in the near future.

Until then though, check out our games and let us know what you think. Also, we're still running a book and game club in our Discord. If you're interested in reading essays and books about technology, politics, and games, or playing games with a group and talking about them like a book club, join our Discord here or shoot us an email for more details.

Our next essay is Shooting to Kill: Headshots, Twitch Reflexes, and the Mechropolitics of Video Games by Amanda Phillips

Our current game is Thief: The Dark Project. 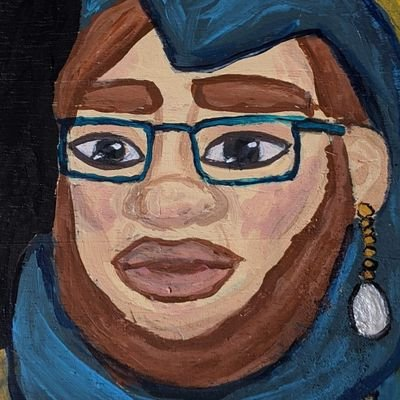 Wants his characters to find their way; doesn't know how to get there himself.

Get E-mail updates about our latest games!

Copyright © All rights reserved | This template is made with by Colorlib